You are here: Home / business / Like a cheeky bargain? Me too – just don’t do what Brian Robson from Cardiff did… 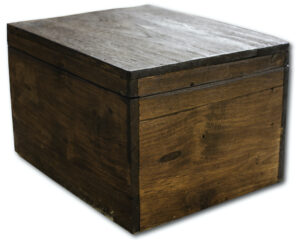 Most people like to find a bargain but Brian Robson (not the football one!), now, a 75-year-old from Cardiff took it to a whole new level. When he was 19 he was desperate to come home from Australia. He’d gone there with work, but he was feeling really homesick and he wanted to come home. But in 1965 the fare from Melbourne to London was £700 and the newspapers report that he only earned £40 a month.

So one night he had an idea.

He decided to send himself as a parcel!

He bought a small crate about the size of one of those hotel room mini-bar fridges, minus the whiskey. And he persuaded his new friends Paul and John (no, not one half of The Beatles!) to strap him in and pack him up along with a ‘water in’ and a ‘water out’ bottle, a pillow and his suitcase. The flight was supposed to last around 36 hours, but it ended up taking three days and unfortunately, he didn’t land in London, he only got as far as Los Angeles.

When he landed in the US, an eagle-eyed customs worker found him after thinking he was a dead body. He told the BBC that a man had “looked through a hole in a wood knot in the chest and we caught each other eye to eye”.

It was a miracle he’d survived. He’d spent a day upside down even though there was a sticker saying “THIS WAY UP” and he’d almost died of extreme heat and cold while in the plane’s hold. Once the U.S. authorities realised he wasn’t a spy he was released, found his way home and resumed his life in Wales, hobbling from sore muscles and exhaustion.

Like most Northern blokes I like to save a bit of money, but I also realise that sometimes I have to pay someone to do things.

I paid a guy to fix our lawn the other day, my Facebook friends told me I could do it myself, but I chose to use an expert instead.

Both at work and at home, when have you wished you’d hired someone to help you rather than do something on the cheap?

Remember: your time is valuable, and, whether you like it or not – you, like me, are not an expert in everything.

Because of strict copyright, I can’t use a good photo for this article so please go here to see them all:

P.S. Brian is trying to track down his old friends, so Paul and John, or their relatives can contact Mr Robson at brianpms@hotmail.com